Listen here on Apple or Spotify.

I am back from my summer of pause. What a joy that while I was gone, so many new people have entered this space.

I’m returning from a few months of deep rest and unexpected creativity, filling me with great energy for the time ahead. To begin, I joined Pádraig Ó Tuama (host of Poetry Unbound, for those who have yet to meet my beloved colleague and friend) in leading a small “salon” on the Greek island of Patmos — a new experience for us to do something like this together, and wonderfully inspiring as we think about events we might create in the season of a more diversified “making” On Being is entering.

After that, I settled in for much of the rest of the summer in Berlin, where I spent most of my 20s in the 1980s, when a Wall ran through it, a fault line of the Cold War. It was a world on the cusp of transformation — the likes of which none of us, until it happened, could fathom. I still have dear friends there, and it was fantastic to reconnect with them and have slow, drawn-out time to do ordinary things together. At the same time, I experienced the city of Berlin in all its dimensionality and complexity, past and present, in a whole new, life-giving way. It had a feeling of homecoming that I did not expect. And it grounded me in the cathartic ways that city formed me. Berlin now again has come to infuse my view of time and history and the callings of our present, this newly cathartic century.

One of the gifts of this summer was a deepened experience of a ritual I’ve come to think of as contemplative reading. I began each day with an over-large sketchbook on my lap, and a book open on top of it. I made a beginning on the science fiction opus of Octavia Butler following my early summer On Being conversation with adrienne maree brown. I picked up the books Mary Oliver published after my conversation with her and savored them a line and paragraph at a time. I devoured an important new work by the British technologist/artist James Bridle, called Ways of Being. This became for me a continuance of the theme of emergence, a deep dive into how we might pattern our thinking and organizing around the intelligence of vitality as revealed in the natural world.

Morning after morning, I read, and interspersed with reading, I wrote. By hand. I had to go slowly as my handwriting is very, very messy. The going slowly was good for me, and so was the distance from a screen. I kept thinking of — and experiencing — that wisdom of Naomi Shihab Nye, that when we write in a journaling mode we are getting in touch with the many selves inside our self. My child and adult, private and professional, pre- and post-pandemic selves were romping around with my very present 25-year-old-at-large in divided Berlin.

I was also inspired to write by hand after learning from Dr. Christine Runyan that when we write by hand, as distinct from typing, we are processing emotionally as well as mentally. And I have realized in recent years that in general, I think conversationally, learn conversationally. Making this further move of reading conversationally was exhilarating. Sometimes I was copying sentences and paragraphs that moved me, sparked something, or were simply beautiful (often true of the words of our friend Mary O.). These jottings would often lead into my own reflections, and surface all kinds of memories and stories.

I am describing this in such detail as it was so, so helpful to me, and I commend it to you: contemplative reading; conversational reading. A practice towards personal stretching and communal pondering (a gift of a phrase from Marilyn Nelson). It does feel to me that some of us — not all — while still tender, are finally able in this late 2022 to look up and around from the many traumas of the last few years, and get settled inside ourselves as we walk into callings placed before us. Within that we are called to clarity that we are not alone in this, and there is much we do not know. We can and must seek out companions and teachers, summoning great tenderness and curiosity towards ourselves and the world.

This exploration and way of seeing will weave through our next season of On Being in the new year, which we are excitedly now planning. It suffuses the spirit of the Lab for the Art of Living, which continues to gestate with great spirit as our team works to bring our content closer to life through practices, tools, and with new and exciting ways of doing this together. You can look forward to an unfolding of offerings from “the Lab” in the months ahead. This newsletter will be the place to encounter all of that — a core touchpoint that will offer avenues to every expression of our work in the world.

The book that’s been building in me for years, and was interrupted by pandemic, is coming out of all that messy handwriting I committed to. And my colleagues and I are dreaming up ways to share, conversationally, as I write.

But for now I will end this rather long missive of return,

Header Image: This was taken on a day trip to an amusement park on the outskirts of Berlin. To our surprise, the place was full of young Soviet soldiers relaxing and enjoying themselves on that day — a rare and almost shocking sight. You can see a group of them behind me (which is really what this photograph was meant to capture.)

Left: The Glienicke Bridge, which still in the 80s was a boundary not just between the two Germanies but between Germany and Europe and a singular point where sovereign territories of the Soviet Union and the United States touched — Soviet-occupied Potsdam and American-occupied West Berlin. I once watched a dramatic exchange of spies enacted across this bridge. On this trip, I rode a bike across it with glee and marveled at its ordinariness.

Center: I walked and cycled through the Brandenburg Gate as often as possible, always with a sense of wonder. In my time it was at the seam of the divided city, blocked by the Wall, and encircled by watchtowers, binoculars, and guns.

Right: Hegel’s grave, in a quiet cemetery in the old East Berlin which I used to sit in, now part of the whole city. Also the resting place of Bertolt Brecht and Helene Weigel, Christa Wolf, and others. 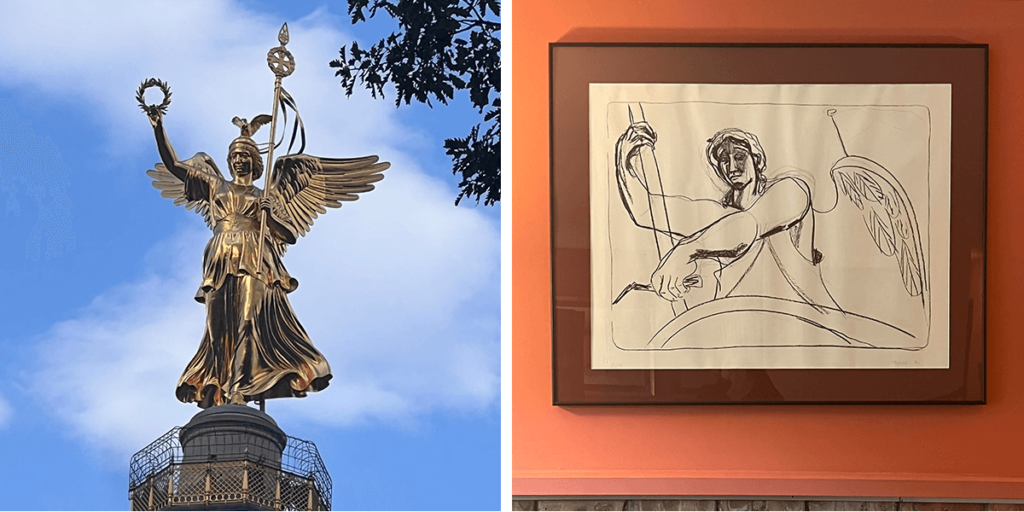 Left: I relished getting up close to the Victory Column near the Brandenburg Gate. For many years I’ve had a likeness of the Goddess Victoria, sketched by an East German friend many years ago, above my fireplace at home. This female figure, Victoria, is a great witness to the drama and unpredictability of history across time, specifically history in Germany but a truth for us all, first from atop the Brandenburg Gate, then from this column. She watched Napoleon march through, as well as the Prussian Army, Hitler, and the Red Army. She presided with her perpetual calm on the night of November 9, 1989, as the entire city of East Berlin poured across and reclaimed the wholeness of their city.

Right: Her likeness above my fireplace.

Krista Tippett Krista Tippett is a Peabody Award-winning broadcaster, a National Humanities Medalist, and a New York Times bestselling author. She grew up in a small town in Oklahoma, attended Brown University, and became a journalist and diplomat in Cold War Berlin. She then lived in Spain and England before seeking a Master of Divinity at Yale University in the mid-1990s.

Emerging from that, she saw a black hole where intelligent public conversation about the religious, spiritual, and moral aspects of human life might be. She pitched and piloted her idea for several years before launching Speaking of Faith — later On Being — as a weekly national public radio show in 2003. In 2014, the year after she took On Being into independent production, President Obama awarded Krista the National Humanities Medal at the White House for “thoughtfully delving into the mysteries of human existence. On the air and in print, Ms. Tippett avoids easy answers, embracing complexity and inviting people of every background to join her conversation about faith, ethics, and moral wisdom.”

A Season of Emergence