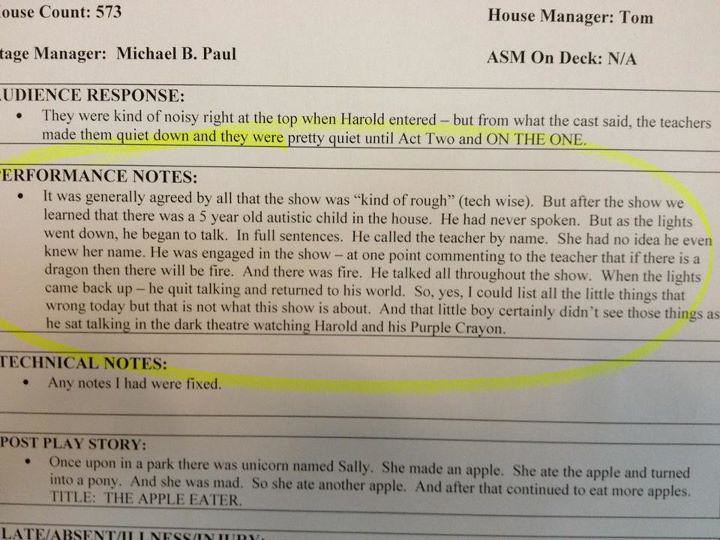 This snapshot of a performance report from Children’s Theatre Company in Minneapolis has been floating around my Facebook feed. Created by the stage manager following every performance, it’s usually a pretty mundane document — a basic communication tool for people working on the current production to let everyone else in the company know how the show is going.

This one, though, is remarkable and speaks to the power of art and story to reach beyond the edifice of our everyday. It reads:

“It was generally agreed by all that the show was ‘kind of rough’ (tech wise). But after the show we learned that there was a 5 year old autistic child in the house. He had never spoken. But as the lights went down, he began to talk. In full sentences. He called the teacher by name. She had no idea he even knew her name. He was engaged in the show — at one point commenting to the teacher that if there is a dragon then there will be fire. And there was fire. He talked all throughout the show. When the lights came back up — he quit talking and returned to his world. So, yes, I could list all the little things that wrong today but that is not what this show is about. And that little boy certainly didn’t see those things as he sat talking in the dark theatre watching Harold and his Purple Crayon.”

And of course, I couldn’t help think of our interview with Paul Collins and Jennifer Elder in “Autism and Humanity.”

Chris Heagle Chris has been a voracious consumer of all things public radio for as long as he can remember. He worked as a technical director for Performance Today, and contributed to several other national programs. Chris is one of the founding team of four that brought On Being to independence in 2013, and he is thrilled to have landed at On Being.

Chris spent the better part of 15 years working in theater as a sound designer and production manager. Though he occasionally pines for the immediacy of live performance, he also believes that in the vast media landscape of our world, radio is still best at stimulating the imagination.

Chris holds a B.A. from Hamline University and an M.F.A. from the University of Illinois. When not in front of a computer screen, he loves the outdoors (regardless of the weather), just about every kind of music, and watching his daughters discover the world.

The Power of Theater

The Poem I Would Have Writ

Life, like verse, contains beauty, grit, and uncomfortable truth. Inspired by a couplet from Thoreau, our columnist reflects on the journey of life as an artistic, creative craft, in the vein of lyrical composition.